Recently, we sat down with Jason Jelinek, Principal, to talk about the technically challenging Nipigon River Bridge demolition project. Entuitive was retained by Western Mechanical as the Bridge Engineering Consultant on this project.

Thank you so much for sitting down with us, Jason. Can you tell us about this project?

Jason: Thank you for having me and absolutely. The Nipigon River bridge is located about 100 kilometers northeast of Thunder Bay in northern Ontario. It carries the Trans-Canada Highway across the Nipigon River at the north end of Lake Superior. The existing structure was built in the 1970s as a two-lane, four-span bridge with a total length of 247 meters and a main span of about 83 meters. The superstructure was comprised of four steel plate girders acting compositely with a cast-in-place concrete deck.

Unfortunately, the bridge had become functionally obsolete and was not capable of meeting anticipated traffic demands along the busy Trans-Canada highway. Since no practical detours for diverting traffic existed, the Ontario Government moved forward with widening the highway at the crossing with two new bridges.

There were significant challenges at the site that inhibited the existing structure from being demolished using conventional methods in its as-built position. Access from below at the east end of the bridge was limited due to steep embankments, barge access was not practical at the main span because of the tall piers and environmentally sensitive waterway, and the existing structure was sandwiched between the new westbound bridge to the north and an existing rail bridge to the south. 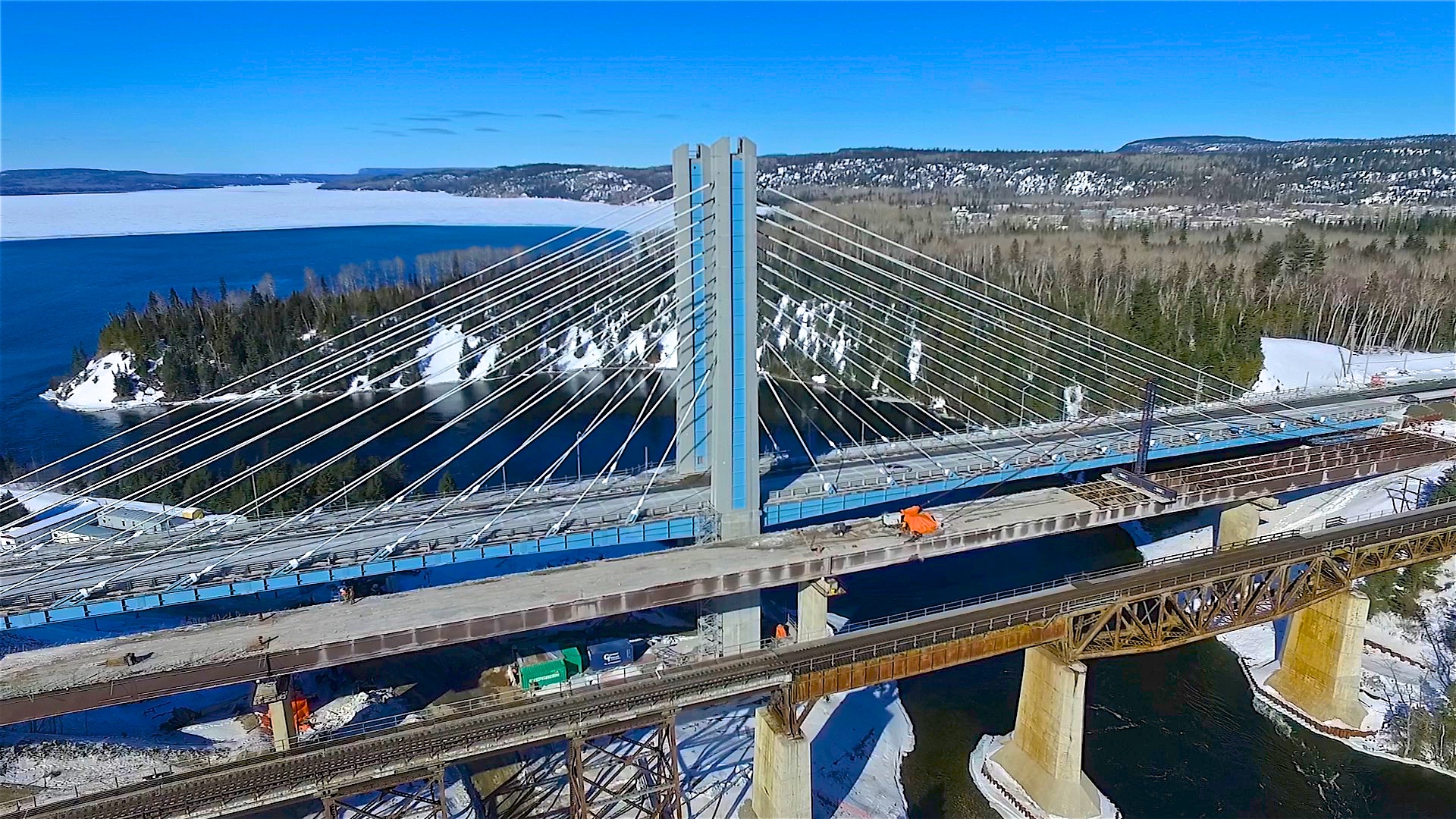 It was recognized that relocating the bridge before demolishing it would eliminate many of these access issues; this was the origin of the de-launching concept. De-launching the bridge entailed rolling the entire 2,500-ton structure to the west into a more readily accessible space where conventional demolition techniques could be used to dismantle it.

That sounds like quite a challenge! Can you describe the de-launching procedure in more detail?

The entire structure was then jacked vertically upwards by about 600 millimeters to allow for installation of custom fabricated rollers at each of the original bearing locations. One roller at each of the piers and west abutment had a drive motor that supplied the power to move the bridge.

With the rollers in place, a stay tower and post-tensioning strands were erected on top of the main span girders in a king-post configuration. This system was used to support the cantilevered end of the girders throughout the de-launch. Strand jacks were used to actively control the tension in the strands through all phases. The point in the sequence where the east end of the bridge had just come free from the east pier resulted in an 83-meter cantilever. The use of the stay tower and actively controlled strands eliminated the need for a tapered launching nose, common in launching procedures, to transition the structure off the support points. 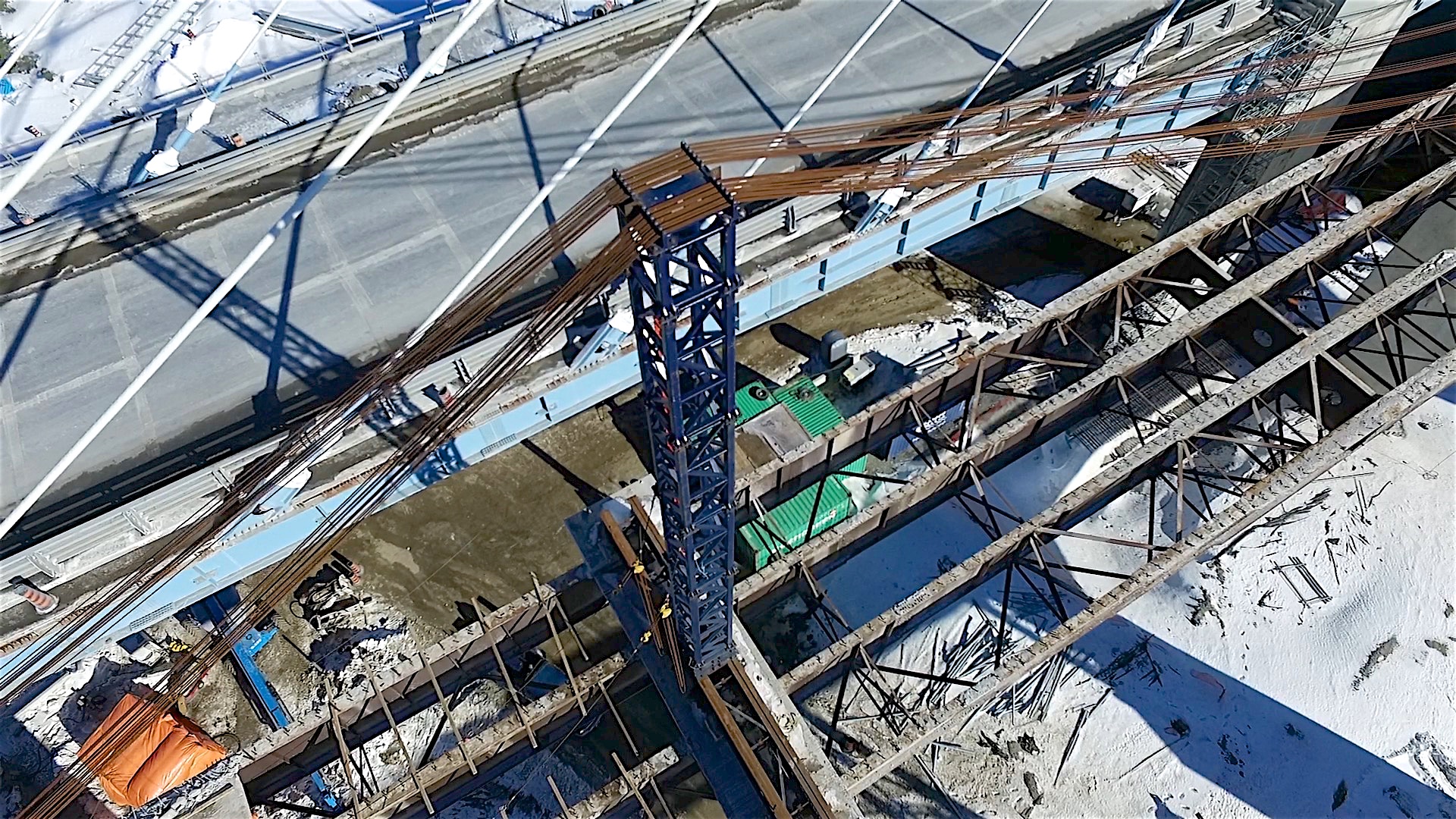 View of Stay Tower and Post Tensioning Strands from Above 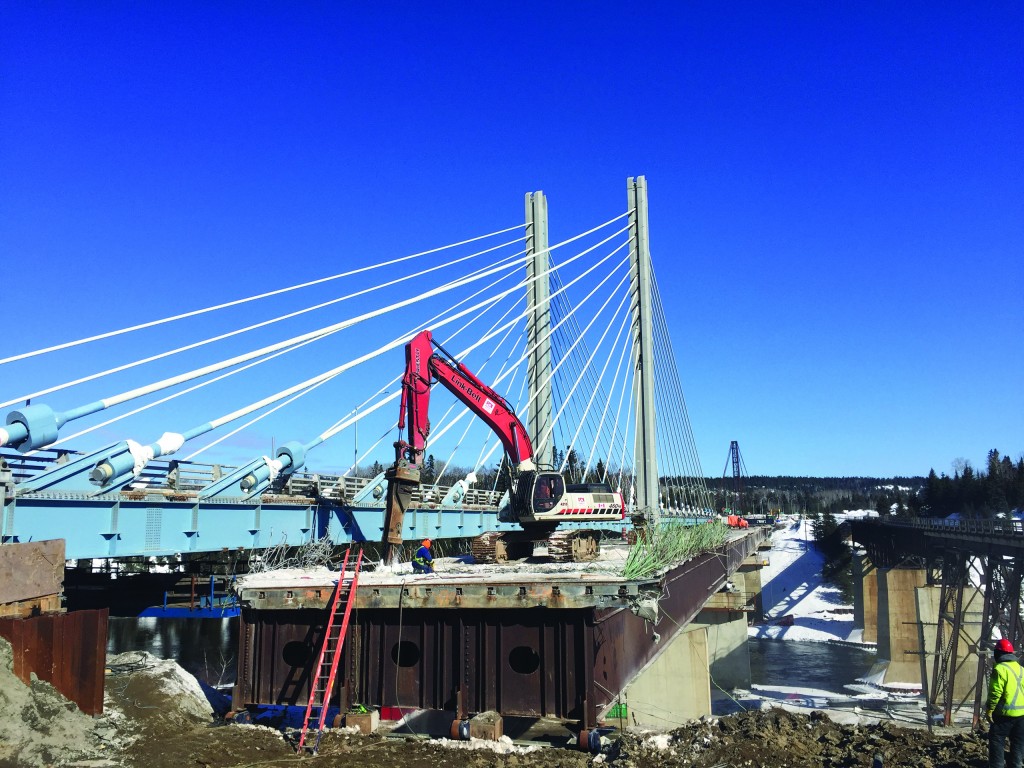 View at West Abutment of Excavator on Deck Breaking Concrete

A time lapse video of the de-launching can be found below:

What were some of the technical challenges you encountered during this procedure?

Jason: Well, when designing a new bridge, the anticipated construction method is typically taken into consideration in its design. With the existing Nipigon River Bridge, launching, or de-launching in this case, was not a condition that was ever considered for the existing the structure. The designer for the existing structure had been extremely efficient and did an admirable job of optimizing the structural steel material for its intended use. There were 24 different girder cross sections along the length of the bridge.

As would be expected, the structure was sensitive to the continuously changing support conditions and being loaded in ways that it was never intended to be loaded. We relied heavily on our experience and analysis expertise as permanent bridge designers to tease out results that demonstrated the existing structure was adequate for the full range of force effects it would experience during the de-launch. Three-dimensional, non-linear, finite element models were used to analyze the structure for every 3 meters of de-launching movement it experienced.

The critical elements in the analysis were the webs of the existing girders. The webs were thin class 4 sections that relied on transverse and longitudinal stiffening to achieve sufficient shear capacity. These stiffeners had been positioned and proportioned during the original design to suit the permanent bearing locations at the abutments and piers. De-launching resulted in situations where these stiffeners were no longer in ideal positions and where web plates that would have experienced lesser shear forces per the original design were now subject to increased shear forces.

Similarly, de-launching meant that the web bearing stiffeners were often not at support points. The thin webs were susceptible to buckling as they went into bearing when passing over the rollers at the de-launching support points. To address this susceptibility, elastomeric bearings were placed under the stay tower to introduce intentional softness that encouraged better load sharing among all four girders. The stay tower was also strategically placed in span to suit the critical step in the sequence that resulted in the 83-meter cantilever. Doing so took advantage of the flexibility of the girder webs themselves, which also helped to share the stay tower loads better among all four girders. 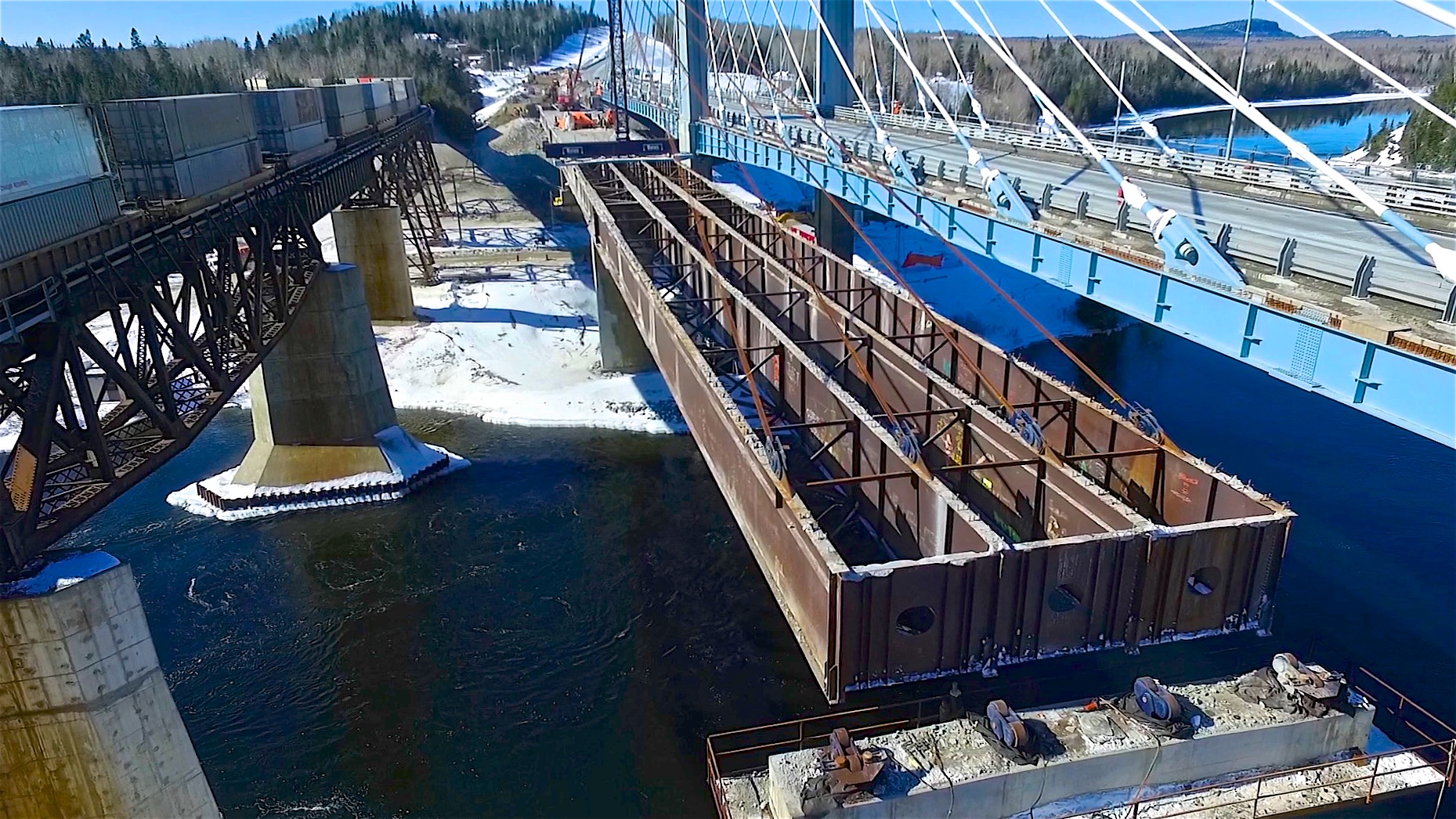 What was your favourite part of this project? Any final thoughts?

Jason: The Nipigon River Bridge demolition project was rewarding to work on because of its technical challenges and how unique it was. It gave us an opportunity to figure out how to make a structure work in ways it was never intended to work and to learn an entirely new demolition approach.

We were able to add value to the project by offering useful ideas as construction engineers that were informed by our experience and expertise as bridge engineers.

If you’d like to learn more about this project reach out to Jason Jelinek. 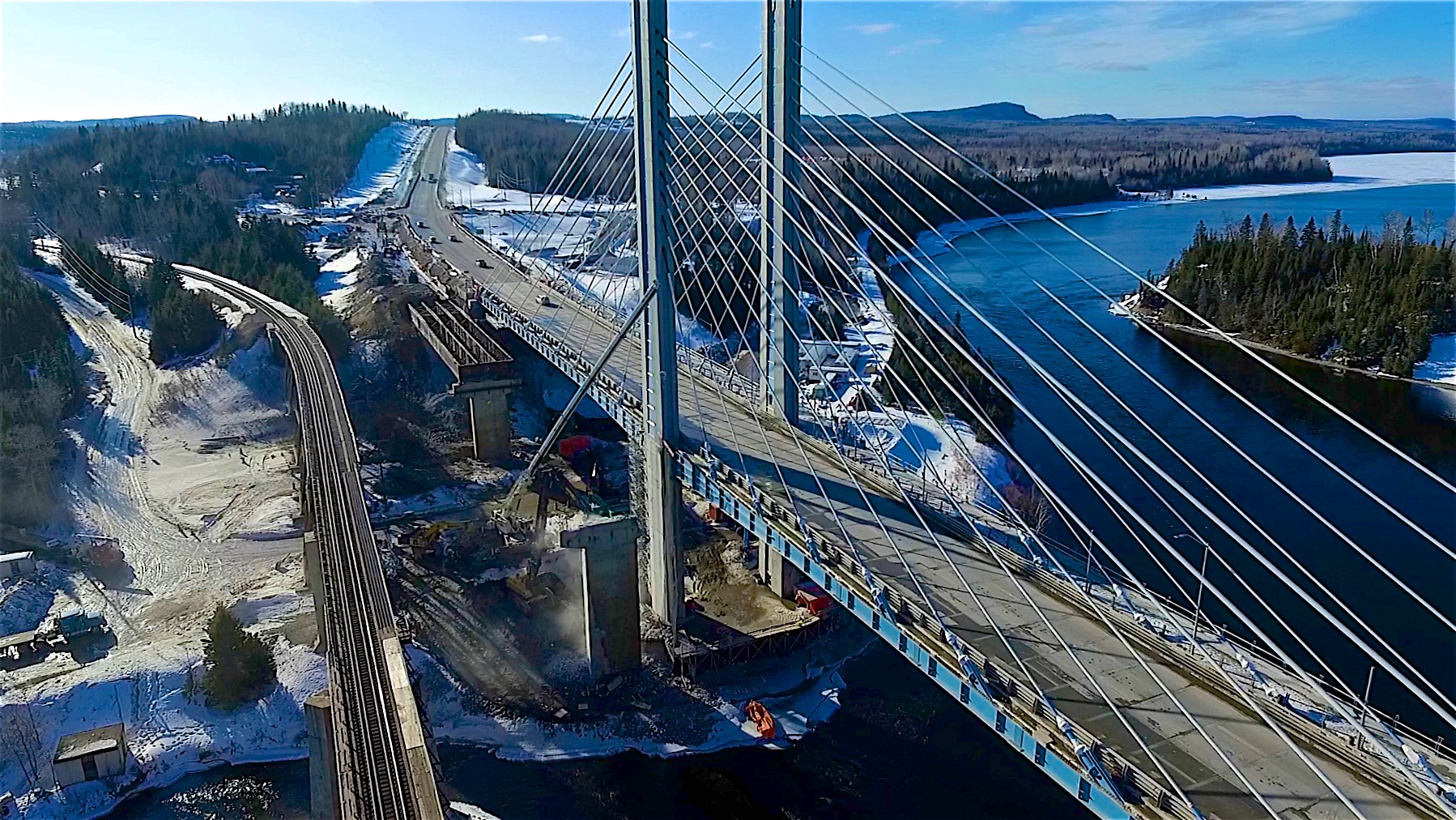 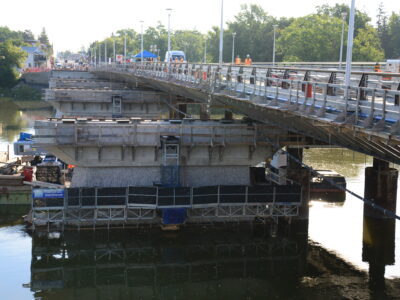 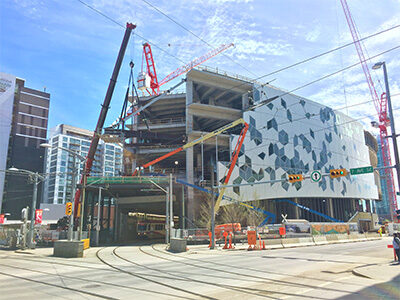 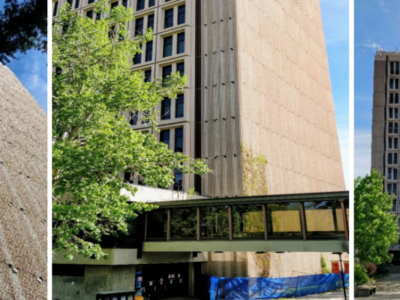